Puchong, 4 June 2016: I find the Crown Prince of Johor's purported statement on Facebook about getting the PM to axe Johor from Malaysia extremely funny and, at the same time, very disturbing. But in chatrooms and kopitiams, it has gotten a lot of people talking incessantly about cessation secession.

Well, it is not really up to Prime Minister Najib Razak to kick Johor out of this beloved country, even if the PM agrees with those jealous critics of Bangsa Johor (who they, again?).

Neither is it up the Yang diPertuan Agong, a position the TMJ would one day assume, God willing.

The ones to decide will be the people. The Johoreans. And I have not met a single Johorean who wants his state to be axed from his country Malaysia, even after the TMJ's posting. Maybe I need to linger near the palaces to find one!

But I did hear this seasoned lady journalist, a staunch Johorean, who said if Jobhor and Malaysia were to part ways - "and it's not going to happen" - she would ONLY ever agree if her beloved Johor is made into a Republic.

So if Johor were to be axed from Malaysia or axe Malaysia, it may not get to become another Brunei like some people may hope. More likely, it will be like neighbouring Singapore which, incidentally, was a jajahan Johor before somebody decided to sell it to Sir Stamford Raffles not too long ago ...


Updates 5/6/16, 11pm:
While many of my brave commenters on this blog choose to remain Anonymous, for whatever reason, the commenters on my FB account are mostly real people using their real names. Check out their views on Republic of Johor that I posted on my Facebook account.

One commenter, a YB from Johor, wrote:

One or two or three other Johorians also boldly spoke up: 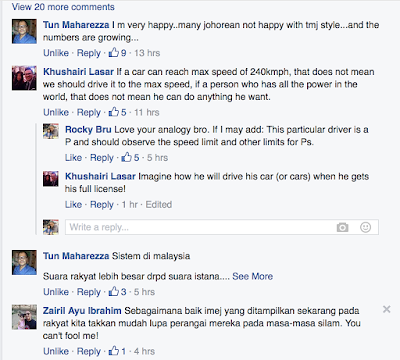