Strange, now the critics are suing! 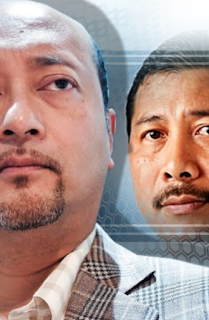 Bangsar, 4 May: I say good luck to the PM's press secretary Tengku Sarifuddin Tengku Ahmad, a former colleague of mine at the New Straits Times in the 80s. He is being sued for defamation by Mukhriz, the son of Dr Mahathir Mohamad. Dr M and two other individuals had just last month filed a lawsuit against PM Najib Razak, Sarifuddin's boss.

I was also sued for defamation in 2006 by the very powerful friends and media advisors of the PM then, so I can appreciate how taxing it's going to for Sarifuddin.

I can see the irony, too. Back then, it was the PM's men who were trying to suppress dissent and intimidate the critics by suing them left and right.

This time around, the so-called critics of the PM are the ones filing legal suits against the Prime Minister himself and now his men.

How times have changed.

So if you are a supporter of Najib Razak, tread with care. You could be next to be served a letter of demand.