The sins of the father? 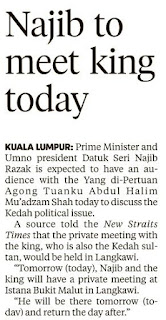 It's Najib Razak who will be singing Dr Mahathir's signature number in the days to come. Such is politics.
But if the PM decides that Mukhriz Mahathir's position is no longer tenable, given that it does look untenable, he will find the younger man a suitable role to assume on his team. It is hard to imagine Najib kicking out anyone for good. He brought in Saifuddin Abdullah despite an unacceptable defeat in the last GE, placed many ex-Umno people who had left Pakatan to serve him in many important posts, including Senatorships and as ambassadors, and retired several seemingly useless and meaningless ex-Cabinet Ministers in cushy corporate nests.
Mukhriz oozes potential. With the right position and environment, he'd fulfil his promise.

KL, 21 Jan
I'm not going to beat around the bush: the so-called coup against Mukhriz Mahathir is the inevitale implication of the actions of his father, Tun Mahathir Mohamad.

Not the only reason, for sure. The Menteri Besar has not performed and has failed to deliver, they said. He spent too much time in Kuala Lumpur, others complained. But those are by-the-way factors, if true. The main reason why the Umno leaders in the state want Mukhriz replaced is because Mahathir has decided to keep up attacks on Najib Razak, come what may.

You didn't expect all the President's men (and women) in Kedah to remain idle, did you? Sooner or later, something would give. Inevitable.

I like Mukhriz. There's nothing not to like about the man. He's not just a nice man but a very nice man. But nice men, I am reminded often, don't win wars. That's why daddy has been winning all the battles he'd chosen to fight before this. That was why Pak Lah was doomed from the start (the people around him were nasty but Pak Lah was a nice man).

And the reason why Najib is still standing long after they expected him to drop dead (politically) after Mahathir had launched his incessant attacks late 2014, abetted by the Opposition and other foes in general.

Mukrhiz says he's a rakyat's MB by the Sultan's consent. But he was picked and put there by Najib Razak. The PM and Umno President is his Boss, whether he likes it or not. He won't be the first MB to be removed and he won't be the last for failing to show support for the Boss.

Only two men, together, can save Mukhriz now. Mahathir and Najib.