It wasn't bullshit. Najib has been telling us the truth all along 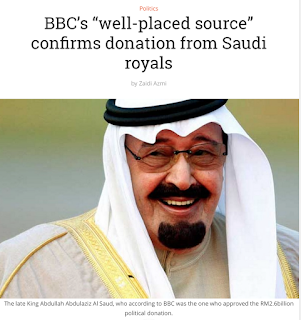 The Mole has the story from the BBC, h e r e.
Remember it's the BBC, not Sarawak Report, Wall Street Journal, the Malaysian Chronicle or one of those so-called Geng Loceng blogs. Of course, WSJ has its own take and SR's Clare Brown is thoroughly scorned (by the Saudi Arabia royal family or by the Malaysia AG, I'm not sure) in her column in one of the British tabloids. Go ahead, google them if you haven't had enough of trash and half-truths. Malaysia is still a free country ...


"The involvemet of the Saudi royal family is an unexpected twist ..."  - Reuters 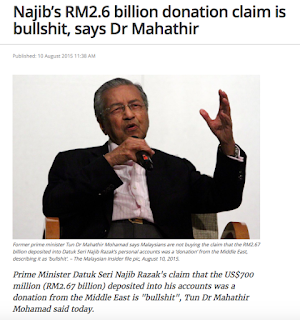 I say unfortunate because the Attorney-General has now confirmed that the money was, in fact, a gift from the Royal family of Saudi Arabia.

Apandi Ali didn't use general terms like "unidentified Middle-Eastern benefactor" or "Arab donors" which the media have been using the last many months, the AG spelled out "Royal family of Saudi Arabia".

Do you know what the Royal family of Saudi Arabia will do if it the AG's claim is not true? First, they will issue a statement to deny the claim and then they will sue Apandi's ass off!

So far, they have not done either. I don't think they will.

Whether the RM2.6 billion case is closed or not is now irrelevant, at least to me. I am just thankful to wake up on this day, as I am sure millions of people in this country are, to have been shown the truth in the scandal that has planted seeds of doubts ad distrust in us.

That the man has been telling the truth about the donation all along.

He didn't bullshit us.