Why Pua not satisfied that his own PAC boss is satisfied? 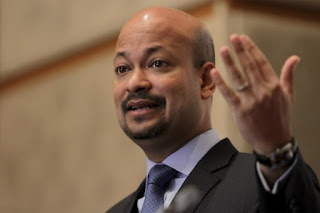 KUALA LUMPUR, Dec 1 — Public Accounts Committee (PAC) member Tony Pua disputes committee chairman Datuk Hasan Arifin’s statement that PAC is satisfied so far with 1Malaysia Development Berhad (1MDB) president Arul Kanda Kandasamy’s testimony.
Pua, who is Petaling Jaya Utara MP from the DAP, said it was merely Hasan himself who was satisfied halfway through questioning Arul Kanda this morning.
Arul is expected to continue his testimony before the PAC this afternoon.
“It is not the PAC's opinion as we have not deliberated on his answers and we have not heard from the other parties,” Pua wrote on his Facebook page today.
Yesterday, the PAC concluded two days of grilling former 1MDB chief executive Datuk Shahrol Azral Ibrahim Halmi in its investigation into the debt-laden state investment firm.
Once the PAC finishes questioning Arul Kanda, the committee will call 1MDB chairman Tan Sri Lodin Wak Kamaruddin to give his statement.
The committee was briefed by the Auditor-General on his final report on the audit on 1MDB.

Guess who's getting personal?  The 1MDB issue, to YB Tony Pua, is beyond political. It's personal now. Eversince he backed down from his own debate challenge in October. You see, Arul Kanda, the 1MDB boss, wasn't supposed to accept that challenge, he was supposed to freeze and be scared shit like everybody else would be. Instead, Arul accepted the challenge and the rest, as they say, was history. No, actually, Pua became history. As many see it, Pua will take a while to recover from that misadventure.

What did PAC chairman Datuk Hasan Arifin really say yesterday? That he was "satisfied, for now" with Arul's answers. He didn't say Arul scored perfect As and or Arul was an angel; he told the Press, after the first two-hour grilling by the parliamentary watchdog, that "So far, the explanations are satisfactory".  (TMI, Dec 1)

At the end of yesterday's session, YB Hasan said: "The probe is not over yet. We are satisfied but we want to have more details". (NST, Dec 1).

Arul will be called again by the PAC on Dec 18 (The Star, Dec 1). I suggest YB Pua prepare all out for that session and make it really count. Last shot at glory.