Yet another reason why Tabung Haji cannot sell its TRX land

Updated:
CEO blogger Big Dog says Affin's strategic initiative on TRX is a classic case of "Who dares win" which servicemen and ex-servicemen alike will immeidately identify with. Read his Hurrah for Ex-Servicemen, in which he underscores why the Affin deal is ny property buyer's dream deal.


"Affin Bank did get a sweeter deal as compared to Tabung Haji, which was more focused on developing a totally syariah compliant investment.

"There is no reason for servicemen and ex-servicemen to doubt their welfare post-retirement from active service. This sweet deal is the Malaysian Government’s way of expressing a nation’s debt of gratitude to their sacrifice."

If Azeez Rahim, the Tabung Haji chairman, still feels compelled to cancel the deal the Malaysian piligrimage fund made with TRX, then he should be ready to kick himself in the butt when other big names in the corporate world set up their bases in the KL financial district.
The latest after Indonesia's Mulia Group to announce  moving to TRX is Affin Bank (see statement below).

In May, when the brouhaha over Tabung Haji's deal with TRX happened, Azeez was accused of using pilgrims' savings to bail out the 1MDB, even though the fact is the deal had taken two long years to conclude, not overnight as claimed.
Following the arrest of ex-PetroSaudi IT expert Xavier Justo and his relationship with the likes of Sarawak Report and Tong Kooi Ong, a lot more has been made known about 1MDB. None of the accusations levelled at 1MDB has ever been proven, as succinctly put by 1MDB champion YB Rahman Dahlan.
And by middle June, MPs were urging Tabung Haji not to sell... [The Star 2015].
So, if Azeez thinks Tabung Haji has to sell TRX land to end the controversy, well he'll be mistaken. The controversy, by the way, has moved away from 1MDB to more juicy issues

p.s. Please note that negotiations between Affin and 1MDB started in 2012, not last week, accroding to the Press statement: 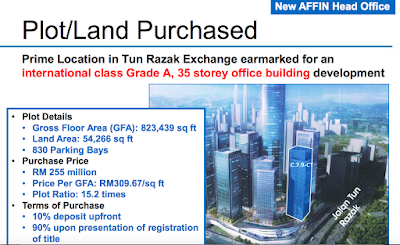 KUALA LUMPUR, 10 August 2015: Tun Razak Exchange (TRX), Kuala Lumpur’s upcoming international financial district, announced today that Affin Bank Berhad’s new headquarters will be housed on a site located in the district’s Financial Quarter, following the signing of a Sale and Purchase agreement.
The plot, earmarked for a 35-storey Prime Grade A office block, will bring the Affin Group’s financial services entities to co-locate under one roof and cater for the Group’s future expansion plans.
A master-planned development with a world-class eco-system, TRX continues to see keen interest from investors and tenants alike. Affin Bank’s new head office will be part of TRX’s financial quarter, essentially the Central Business District of TRX that occupies the most visible corner of the site, fronting both Jalan Tun Razak and Jalan Sultan Ismail.
“We are pleased with the progress we are making in our negotiations with local and international parties, and we are happy to have Affin Bank with us as we continue to realise our aspirations to create a world-class financial district," said CEO 1MDB Real Estate Dato' Azmar.
The Sale and Purchase agreement was signed following an extensive negotiations that began in 2012, and it covers the development rights to build a commercial tower for a consideration of RM255 million. The development will have a Gross Floor Area (GFA) of 823,439 sq ft, with the price per sq ft GFA of approximately RM310.
TRX’s comprehensive master plan includes implementing site-wide infrastructure with a sizable public realm and excellent transport connectivity. The financial district is investing close to RM3.8 billion for its infrastructure, and the amount is factored into the selling price of the land.
Investors will get fully serviced plots on net land with high plot ratios. Affin Bank’s new head office has an attractive plot ratio of 15.2, while the entire TRX district – which will boast an urban central park and amenities such as on-site water treatment system and district cooling plant – has a plot ratio of 6.8.
Slated for Phase 1 completion in 2018, tenants of the financial district are expected to enjoy unrivalled connectivity to Greater Kuala Lumpur and beyond, with the TRX MRT interchange station on site, direct links to Kuala Lumpur arterial roads and major highways, as well as connections to the planned KL-Singapore HSR in Bandar Malaysia via the MRT Line 2.
To date, TRX has signed global property and infrastructure group Lendlease to develop the Lifestyle Quarter; Indonesia’s leading property developer Mulia Group to develop the Signature Tower plot; Lembaga Tabung Haji for a residential plot, and global leader in water management Veolia Water Technologies South East Asia to provide water recycling and treatment plant.
-END-