What should an esteemed member of the Malaysian Anti-Corruption Commission, who happens to be  Chairman of a PLC, do when the company faces a crisis of confidence and his directors are lodging police reports against one another over claims of deception, outright cheating and corruption?

1. Should he step down as Chairman of the PLC in order to protect the good name of the institution?

2. Or should he step down as a member of the MACC in order to protect the good name of the institution?

"Both," the MACC man said to me after a while.

"He should expunge himself as MACC member and he should also step down as Chairman of the PLC at least until the crisis blows over.  It's a moral question."

We were having coffee in Bangsar the other night. I called him out because I wanted his take on Tan Sri Dr Hadenan Abdul Jalil, the former Auditor-General who chairs one of MACC's main committees and happens to be Chairman of crisis-laden public-listed company Protasco (Why spend RM97 m to cheat a company of RM50 m? - A Voice, 20 Nov 2014

This took place the day before Utusan Malaysia came out with this overdue article: 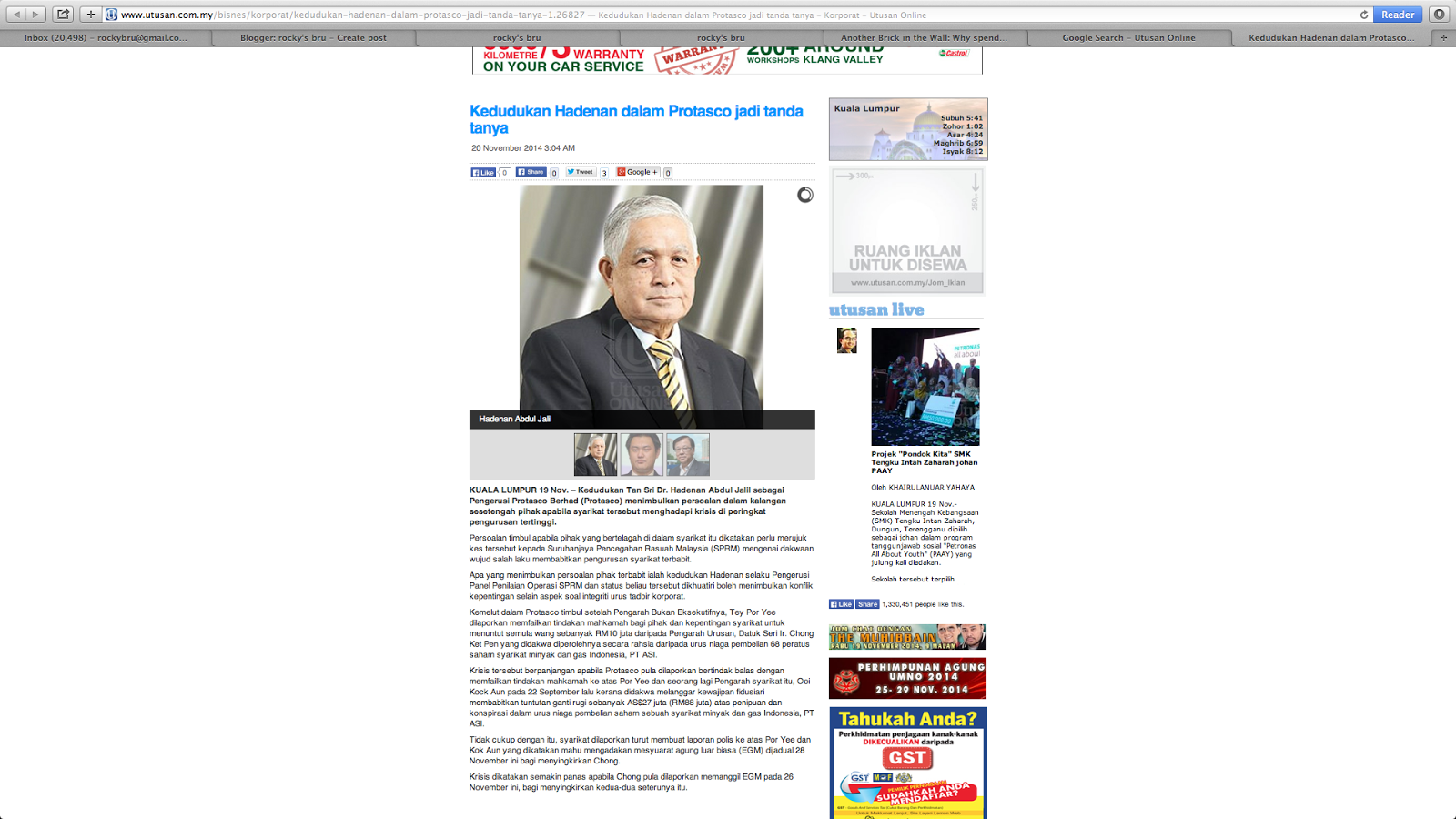 (translated) Poser on Hadenan's position in Protasco by Utusan Malaysia, 20/11/14

Protasco's troubles have been in the news for weeks before the bloggers picked the issue up. When that happened I knew that sooner or later, lie it or not, Hadenan's position would come under scrutiny.

Especially when the MACC itself has been struggling with its own demons lately in the form of a couple of its former esteemed members who seemed bent on attacking the institution given half a chance (read Cameron Highlands landslides not MACC fault - The Mole, 13 Nov 2014).

The promotion of an MACC officer who was doing his job when he interviewed Teoh Being Hock over a corruption case has also become a headache for the Commission.

Another Tan Sri whose term was not renewed last year is even testifying against the MACC chief himself in a case between the Commission and a suspect corruptor.

I told the MACC officer that it's high time the institution reviews the selection process for its councilors and committee members. The MACC is a powerful entity that in the hands of the unscrupulous can open doors of many opportunities. Having the wrong people on board can open the Commission to abuse or at least manipulation. Individuals who sit on board the MACC must not only be clean and credible but must be seen as such by the general public, at all times.

Perhaps the MACC should not appoint businessmen or company directors. Or those who agrees to become a Councillor must be required to give up other posts that might place him in a position of conflict of interest.

That way, it won't ever place a respected member of society like Protasco's Hadenan in such a painful dilemma.

If you do not know how to trust both of them, then throw both out.

Let police, MACC and court do their job

Malaysia is not Japan. In Japan, if their sashimi smells, their chuck it off already. We Malaysian continue to cook that into ikan goreng.

The first and most important qualification is that the person must be a son of the soil. For sometime now Umno is infiltrated by half breeds and not Malays. In the early stages of Umno it was decided that the organization is restricted only to Malays. It was only on this requirement was circumvented by the half breeds just so the half breeds can become members.
To day there are more half breeds than real Malays in Umno. In fact there are so many half breeds (almost more than half in Umno are only half breeds in the organisation) it can and should no longer call themselves a Malay organisation.

Once an individual is a half breed no matter what he does he cannot alter the fact that he is and will always be a half breed, period. An eurasian or a mamak will remain as eurasian or mamak and right now science has not come up with a method to alter or change that. Therefore Umno is no longer in the hands of the Malay but is in the hands of the half breeds. This is a fact that cannot and must not be denied and there should be a new organization to cater for the half breeds and that Umno be returned to its original intension that the organization is restricted to the Malays only.

I wonder how this chap above can arrogantly make the claim that UMNO has more half-breeds than Malays in its membership list.
The questions that naturally come to my mind are:
1. Does he has access to the said membership list?
2. Has a survey ever been conducted by UMNO or anyone else to determine the lineage or ancestry of its members?

Sorry Rocky, but I digress from your topic 'The Hadenan Poser'