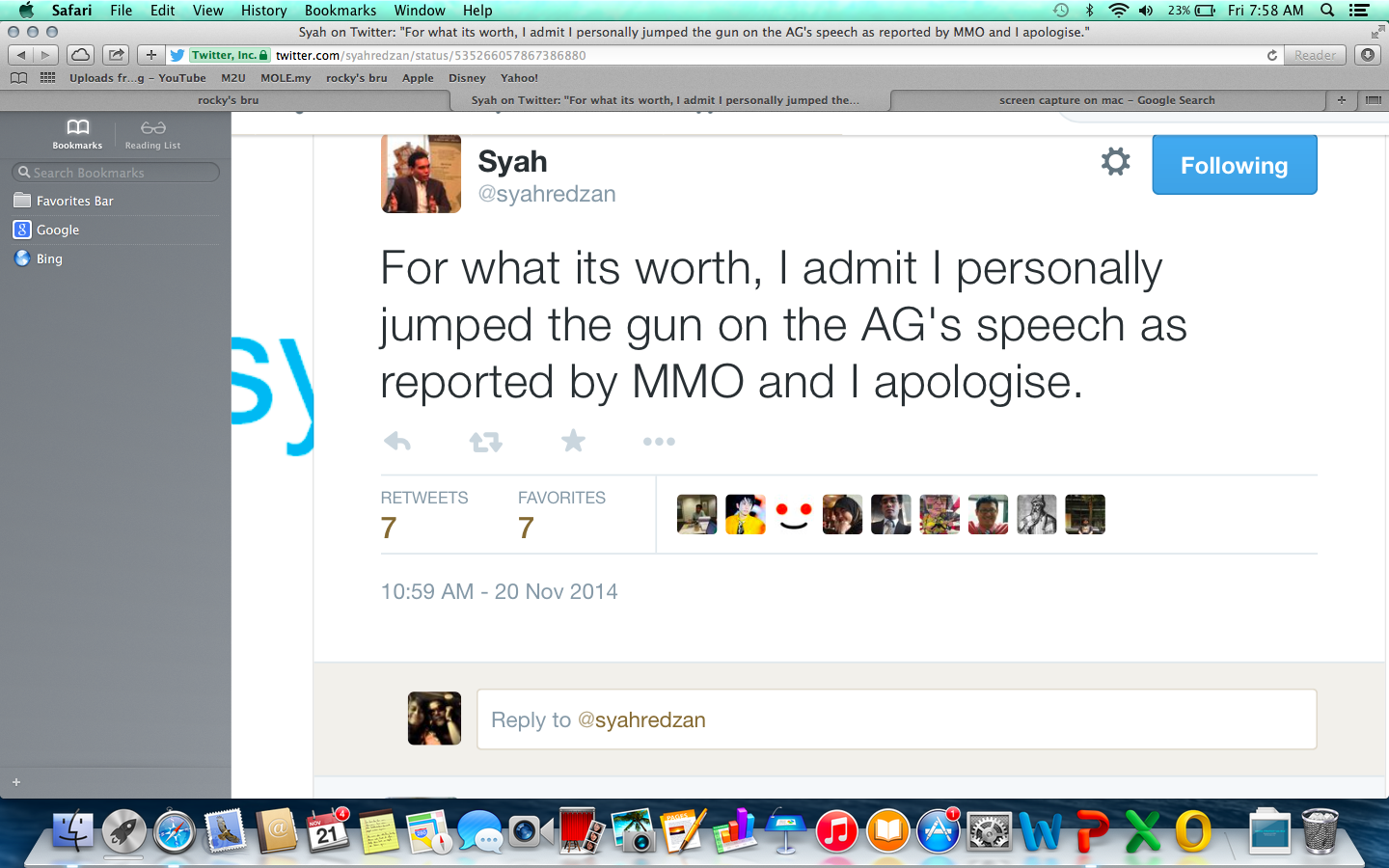 Wrong is wrong and I think the young lawyer should apologize, learn from this mistake (ie try not to be so gullible next time, double check what you read online especially if it sounds like a load of bullshit) and move on. It does not matter if Gani Patail wants your apology or not. It's about being accountable for what you do. Scores, hundreds and perhaps thousands of people had read those tweets and made to believe that the AG had said that interacial marriages put national harmony at risk ...

p.s. Mmm, the original link has been removed (wonder why?) but not before it was caught by a Singapore website: Interacial marriages putting national harmony at risk, says Malaysian AG.

Where have these people been? - Tan Sri Abdul Gani Patail
A lawyer, an active critic of the Barisan Nasional Government, ended up at the receiving end today after stirring up a heated controversy on Twitter about Attorney General Tan Sri Abdul Gani  Patail.

He not only told Gani Patail to be ashamed of himself for allegedly saying "interracial marriages have put national harmony at risk" but also attempted to whip up netizen’s sentiments against the AG.

"I think all the children of mixed marriages should rage (against the AG),"  Syahredzan (pic above) shot out on micro-blogging site Twitter.

When told of the suggestion made by Syahredzan that he was against interracial marriage, the Attorney General guffawed.

"Where have these people been? I am a product of mixed marriage. How can I be against interracial marriage? I have relatives who are Bumis (Bumiputera), Chinese and Indians, who are Muslims and Christians.

"Please tell this lawyer and his friends to check their facts!" he told The Mole.

Syahredzan, a keen critic of the BN government that his father presumably supports, managed to rile some of his Twitter followers, one of whom called Gani an "idiot".

The Mole contacted Shahredzan and pointed out that his tweets on Gani were out of the original context.

Syahredzan admitted that he had jumped the gun by criticising Gani in his earlier tweets but refused to apologise.

"No..I don't think I should (apologise to Gani) because at the end of the day I've already put up verification to the whole misunderstanding on Twitter.

"But this kind of criticism is something that a prominent figure like him gets along the way."

Syahredzan however said he would apologise to Gani only if the latter "wants to hear it."

"But what's important is I think more than apologising I have actually taken the time to clarify the article which led to the misconception about the AG," he said, adding that he should have cross-checked the article with the AG's real speech before passing comments.

Unlike Syahredzan, Twitter user Niki Cheong who earlier said Gani was "just an idiot," apologised in his tweet later.

"His (Gani's) statement makes sense in context. Sorry for my misjudged anger."

Chong claims on his website that he is a writer, lecturer, speaker on journalism and digital culture.

The Malay Mail Online report, which has since been removed from their website, alleged Gani as saying that interracial marriages have given rise to a new conflict between Civil law and Syariah law, in relation to the unilateral conversion as well as custody issues on minor children where only one spouse converts to Islam.

Gani was also reported to have said that the failure of one of the spouses to resolve issues prior to conversion and attempting to use different jurisdictions in Syariah and Civil courts to their advantage would jeopardise family and national harmony.

However, the Malay Mail Online article is believed to have taken Gani’s speech out of context and made it look as though the AG pointed to interracial marriages as a risk to national harmony.

UPDATE: Malay Mail Online has since apologised for misreporting and rectified their earlier erroneous report.

kandara · 9 hours ago
Niki Cheong apologized but Johan Jaffar's son refusing to apologize even after being proven wrong. Cannot be the upbringing as the father is a man of substance, full of humility.
Report
Reply
0