Sabahans don't want secession; we just don't get it! 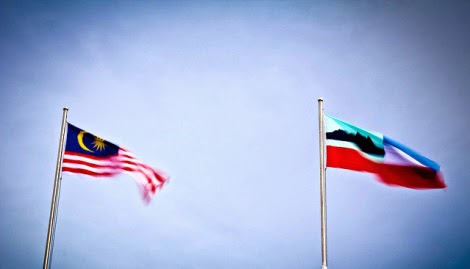 Updated: The blogger Zakhir Mohd says the conspirators for the so-called Sabah secession are from outside the State. He named some of them in his latest posting Semenanjung luficers instigating Sabah secession.
"This is the perfect time for the Sedition Act to be used against (them) …" he writes.
I am not a fan of the Sedition Act but I can imagine that the majority of Malaysians will appreciate the wisdom of the government if it uses the Act judiciously and on anarchists, not on the likes of Azmi Sharom, whose appeal had always been niche (until he was charged with sedition, that is).

Yeah, right. This is exactly what Hishammuddin shouldn't be saying. But he did, anyway.   What such talk does is to make people - Sabahans, especially - think that Hisham is trying to scare them. Read the report:

KOTA KINABALU, Sept 21 ― Sabah will be vulnerable to possible terrorist attacks from Southern Philippine’s Islamic rebels without the protection of security forces from the federal government, Datuk Seri Hishammuddin Hussein warned today, warding off calls for the state to leave Malaysia.
The Defence Minister warned pro-secessionist groups that the threat of a terrorist takeover was very real in light of a recent statement from Southern Philippines’s Bangsamoro Islamic Freedom Fighters (BIFF) and the Abu Sayyaf, who have pledged support for the Islamic State (IS) militant movement.
“We are not trying to scare the people but we want to remind them (pro-secessionist groups) not to gamble with Sabah’s future.
“The terrorists have made it clear of their intentions of creating an Islamic State in the region,” he said, reminding Sabahans that security personnel in the Sabah now comes from the federal government’s Defence and Home Ministry.

What Hisham should do is leave it to the Sabahans to speak on behalf of Sabah regarding the secession talk. Because if you understand the sentiments on the ground, you'd understand that Sabahans DO NOT wish for secession. They want a better deal from the Federal Government and they have not been getting it (and they and we know that) despite Najib Razak's gesture of putting more Sabahans in his Cabinet after the last general election.

But secession? Sabahans are more Malaysian than a lot of Malaysians from the Peninsular who call themselves Malaysian-first. Surely Hisham knows that ...

Read also: Scottish nationalists in tears after countrymen and women voted against "independence"