Spoofed! And taking for granted the security of the PM and other VVIPs flying Perdana One, Two and other flights under the existing arrangement

The Mole's story here sounds annoyed but we had a good laugh over this, er, laughable attempt to "kill" the story on Perdana Two that the blogger Big Dog broke yesterday. It was a good thing the PM's Office issued an official response to the story on the same day ; otherwise, some people may think it had something to do with these spoofs. You know how gullible some people are ...

What's NOT laughable arising from the entire episode is the disconcerting conclusion that too much information with regards to the aircraft used to fly our PM, DPM, Yang diPertuan Agong and other VVIPs is so easily accessible on the Net. And some of these are super-sensitive info. Like the fact that the plane flew to Tel Aviv, for example. And that Perdana Two is aka NR Two, which leaves very little room to doubt who the VVIP passenger on this aircraft is!

Study the details in this email sent to me soon after I had published the PMO's press release issued yesterday afternoon in response to the Perdana Two posting. Note that the PMO's response had left out a lot of these finer details:

Comlux Aviation Services has successfully delivered an ACJ319, the Head of State of Malaysia aircraft operated by Jet premier One. Since the arrival of the aircraft in June 2013, the dedicated engineers, technicians and craftsmen of Comlux have performed the maintenance tasks required for C4 and the 6-year checks and have reworked major parts of the VIP cabin to comply with an Airworthiness Directive by EASA. A new external painting has also been performed, featuring now the new emblem of the Malaysian Government.
http://www.comluxaviation.com/all/4885/


Note: This Airworthiness Directive (AD) is issued by EASA, acting in accordance with Regulation


(EC) No 216/2008 on behalf of the European Community, its Member States and of the European
third countries that participate in the activities of EASA under Article 66 of that Regulation.
This AD is issued in accordance with EU 748/2012, Part 21.A.3B. In accordance with EC 2042/2003 Annex I, Part M.A.301, the continuing
airworthiness of an aircraft shall be ensured by accomplishing any applicable ADs. Consequently, no person may operate an aircraft to
which an AD applies, except in accordance with the requirements of that AD, unless otherwise specified by the Agency [EC 2042/2003
Annex I, Part M.A.303] or agreed with the Authority of the State of Registry [EC 216/2008, Article 14(4) exemption]

Reason:
Discrepancies were discovered in the recording of flammability test samples of
certain veneered panels, known to be installed on various business aeroplanes,
and in the correlation of those samples with the installed aeroplane components.
In particular, it was discovered that there was a possibility that the varnish,
applied to the veneered panels, did not have any flame retardant layer, whilst test
samples prepared for flammability testing did have such a layer. The approval
holder, Jet Aviation Basel (JBSL) identified the aeroplanes and the related
modification approval numbers, on which this discrepancy might be present.
This condition, if not detected and corrected, could, in combination with an ignition
source, lead to fire in the aeroplane cabin, possibly resulting in damage to the
aeroplane and/or injuries to the occupants.
To address this potential unsafe condition, JBSL developed a corrective action
programme, including instructions to rework the cabin interiors of the aeroplanes
on which the discrepancy might be present.
For the reasons described above, this AD requires rework of the affected cabin
interior parts, as specified in the JBSL corrective action programme. This AD also
allows, as alternatives, either the accomplishment of certain inspections (chemical
analysis) of the cabin interior parts with follow-up actions, depending on findings,
or modification or replacement of the affected cabin interior parts. 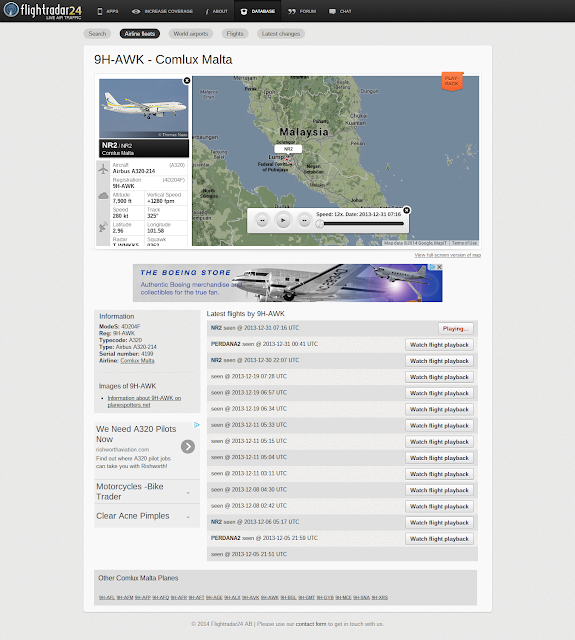 My point is simple: I think under the existing arrangement leaks too much information out into the open. It's not comforting at all. For the safety of our VVIPs, shouldn't we leave the operations and maintenance of Perdana One or Perdana Two to our Air Force. Plus it would stop the chatter that some middleman's making tonnes of money as go-between ..