More updates, Jan 5: Shamsul Akmar, in his weekly column in the NST, observes Khalid Ibrahim's wishy-washy stand and Hadi Awang's insipid view of the Allah issue and says people will now finally have a better insight into what Pakatan actually stands for.


"... the bid by the DAP trio to amend the enactment would be quite explosive and could spark a major upset to the political equation. If in the past, the fear among DAP supporters and other non-Muslims is the emergence of Pas as a political power that would upset the equilibrium by pushing for hardline theocratic policies and laws, what is happening is the opposite." Read more H E R E 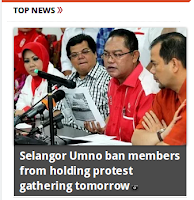 Updated, Jan 4: Umno guys in Selangor have promised to keep their cool. All parties should, especially the DAP fellas. Last thing we need is a brawl, boys and girls. Still, I think the police in throughout the State should be on high alert, just in case some nut case decides to burn down a church or deface a surau like the last time. NST story h e r e.

Illegal bibles. If the Selangor DAP trio, aided by the Selangor State Assembly Speaker, want to amend the Selangor Non-Islamic Religious Enactment 1988, that's their business as lawmakers in that state. But there are proper procedures to follow. In the meantime, this 35-year old law that bars non-Muslims in Selangor from using the word "Allah" - and which many believe has enabled Muslims and Christians in the state to co-exist peacefully for decades - must continue to be adhered to. As lawmakers, the DAP trio and Hannah Yeoh are sworn to uphold it.

That means, in the spirit of the Selangor Non-Islamic Religion Enactment 1988  (not to mention the December 2013 decree by their Sultan, too), the Trio and the Speaker must admit that:

2. The Editor of the Christian Herald (the publication that dragged the Federal Government to court also over the word Allah in its publication) had committed the original act of provocation in this latest row on Allah; that is, if he did make the statement to the effect that Churches in Selangor would continue to use the word "Allah".

If they succeed to amend the Enactment, good for them. Until then, they will have to live with the fact that not everyone in Selangor can use the word "Allah". That's the state law. Even the Sultan's decree was based on the Enactment.