Lim Guan Eng's greetings at the very end of this posting, right down there in the gutter ... GO THERE AT YOUR OWN RISK! 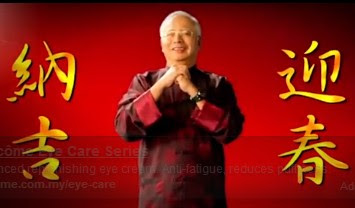 It's just turned midnight but the distant staccato of firecrackers is like the sound of a thousand drums ushering in yet another new year on the ancient Chinese calendar. In the usually still Puchong night air, this is music to the ear. Reminds me of my own Hari Raya.

Talk about drums ... if you have not watched this very special CNY ad on video featuring our Prime Minister, you must. Click Gong Xi Fa Cai: Najib h e r e or Beating the drum for CNY, h e r e.

Never been done before. And only in peaceful and prosperous Malaysia.

HERE GUAN ENG GOES, ONCE AGAIN TRYING TO ASSOCIATE THE MALAYS AND MUSLIMS WITH HITLER AND NAZI GERMANY: 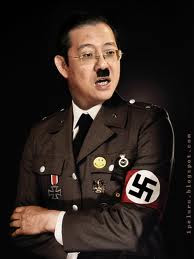 “Just because Perkasa is supported whole-heartedly by UMNO does not give Perkasa immunity from the law or the freedom to insult non-Muslims and deprive non-Malays of their basic rights. Malaysians are grateful that Muslims and Malays also reject such extremist tactics that are similar to those employed by Hitler and the Nazis in Germany before the Second World War.” - Lim Guan Eng