Tottenham lessons for PDRM, and us 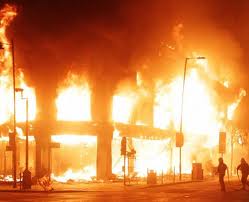 "A riot is a peaceful assembly that has gone awry".
I wrote this on Twitter and some pro-Bersih 2.0 people started becoming very defensive and a little violent. I don't know why these people think that it's all about them all the time. It is not.

People march in protest every day lah beb. In some places on Earth, people march because they are hungry and they don't have jobs. Or because they want greater freedom. Gays want to marry gays and they happily march for their cause. Workers march to back demands for better pay and longer holidays. Men march to bring down their leaders and install new ones.
In some of these countries, the demonstrators are shot dead and beaten up. There are cases where the police were hacked to death.. Even in the US, they were once killing bell-bottomed students who wore flowers in their hair. Mind you, that wasn't that long ago.
In England, where democracy reigns and racism's dead (or so some of us like to believe), there have been so many cases of assemblies that started peacefully and ended not-so-peacefully. Watch the BBC clip here on the fees protest by students in Nov 2010 for a recent example. And what's raging in Tottenham right now had happened before in Brixton, 1981 (read Different ideals, similar lessons, The Guardian, Aug 9). Don't even start on countries like Malawi, Egypt and even neighboring Indonesia and Thailand where scores have killed and died in the name of peaceful demonstrations and riots
From the riots in Tottenham to the peaceful Bersih in KL, the police came under close scrutiny. Did Police get their tactics right?

"What happened on Saturday was that they were under-resourced and they didn't anticipate the levels of violence and vandalism," said Mr Ramm.

"In a perfect situation you would have all the resources you need and had you had those resources on Saturday you would not have allowed looting and damage to property."

In Bersih's case, the police made sure they had all the resources to avoid violence. In fact, they were accused of going overboard and violence against the demonstrators. 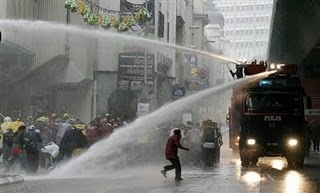 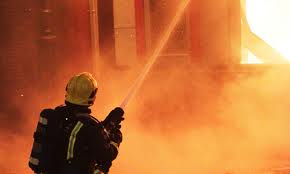 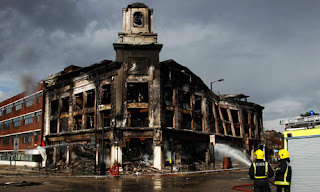 Check out Apanama's When the water canon cam late
at August 09, 2011