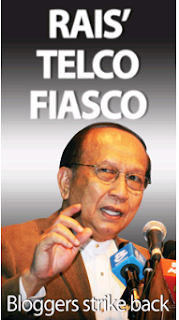 KUALA LUMPUR, 20.10.10: A group of bloggers met last night to discuss the police report lodged against bloggers by a Cabinet minister and the on-going investigation by the MCMC that was initiated against two bloggers so far following that police report. They decided at the end of their meeting to set up "Bloggers for Malaysia" and vowed to make it a force to be reckoned with against parties - government or not - that resort to police reports, the MCMC, and lawsuits to intimidate bloggers.

Controversial author Syed Akbar Ali, who runs OutSyed The Box, was unamimously made protem President of the BfM (same initials as everybody's favorite station BFM Radio). Syed was charged for sedition in 2008 on the same day as RPK but this charge was DNA (Dismissed Not Amounting to Acquittal). RPK was also given DNA later as he'd fled the country by that time.

Tony Yew, the blogger Alliedmaster who took on Malaysia Airlines in 2007 (and lost, of course) over the infamous sacking of his pregnant stewardess wife, is the pro-tem secretary-general.

The meeting took place in the conference room of the National Press Club, the same place the so-called "Band of Blogers" was formed one still night in 2007 by a group of Malay bloggers from different political backgrounds who met discreetly to plan a new media "war" against the arrogant and ignorant Abdullah Ahmad Badawi's administration.

The NPC was also where some 60 socio-political bloggers of various races and political affiliation met to set up the National Alliance of Bloggers, or All-Blogs, after the shocking lawsuits against me and Jeff Ooi.

With the setting up of BfM, All-Blogs will cease to be. I will be writing to the other All-Blogs' office bearers in my capacity as the interim presidenr of All-Blogs of my plan to disband it.

I am confident that BfM will be able to pursue All-Blogs' objectives of promoting responsible blogging and providing a shield for bloggers.

We will meet in two weeks to finalize details for registration and expect to call for a general meeting by end of the year or early 2011. In tne meantime, the protem president has issued a stinging statement regarding the latest attempt to intimidate bloggers by the authorities.