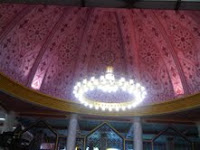 Alfatihah. Yesterday, I could not go to the kubur to help my old friend Manja and Noozita bury their youngest son. I'm not that tough. I watched a friend bury his child once and that's enough. No parent should have to bury his or her baby; too big a test. Ashraf, 0nly 18 when he died in the car crash, was the second child the couple have lost.

I left after the prayers at the mosque in USJ. We grieve, AAT tells me. We all do.

Road accidents in our beloved country is claiming lives of people of all races and all ages at an unprecedented scale and level.
Our losses per million population as compared to many other countries is higher and possibly increasing at an unpreditable rate.

All Malaysian can be truly 1Malaysia in respect of making efforts to reduce this high level of loss on a daily basis.

On the media level, there should be a concerted effort daily to highlight all accidents taking place everywhere in Malaysia especially the fatal ones so as to ensure greater public awareness of its happenning.

A constant daily barrage of reporting on just about every fatal accident including seriously injured accident cases will surely FINALLY enter each and every MALAYSIAN's subconcious so much so that we/they will be always more alert than before and start taking measures ourselves.

Measures like driving more slowly instead of constantly speeding for a start, other measures will soon come into play after that.

At least the media is then doing all it can AT ITS BEST..
THE REST IS UP TO THE INDIVIDUALS AND PEOPLE TO LEARN FAST AND AVOID UNNECESSARY ACCIDENTS.
thank you.

hello rocky , you are one big umno running dog.

Salam takziah untuk Datuk Manja dan keluarga.
The last time I attended a funeral with Manja was in Temerloh when former NST KB bureau chief arwah Azran passed away in 2003. Manja and Azran were buddies while studying in ITM. Manja was the one who recited the azan as Azran's remains were taken from his family house to the grave. He was a picture of strength at that moment. May he and his family be as strong in this time of great sorrow.

too true Rocky, I once had to rush back because a friend's son suffered severe asthma attack... on the way back, about two hours away from KL he got a call to inform him the worst

we arrived in KL and it was the hardest thing I had to do trying to get rid of the lump in my throat, the knot in my tongue and the lump of grief in my chest

now that you mentioned it, I remember that this is Datuk Manja's second loss of a child...

One can only look from far, unable to fathom their loss, only able to offer what must look like pale shadow of the true emotion that is washing over them

from god doth we come,unto god shalt we return

Kalau sdra terserempak dgn Datuk Manja dan isteri, tolong sampaikan salam dan ucapan takziah saya. I knew them when both of them worked at BH & NST office in Kuching. After they transfered back to KL, we lost contact.

posting about the dead son of your fren pun kena bambu jugak?


those you could not have the decency to say Al Fatihah or give condolences to the deceased, PLEASE DO NOT WRITE ANYTHING!

Write on other postings please..

I knew Datuk Manja from a distance as the boss of my wife at BH. And when I received the news at about 11 am yest, I sat stunned and my eyes swelled trying to comprehend tne the pain and sorrow that the parents were going through.....

As you rightly said, no parents should be burying their child. But who are we to control all circumstances besides the Almighty. Allah loves him more.

May Allah give the parents and siblings the strength and courage to endure this tribulation. May this episode bring the family even closer to Allah swt. Our prayers are with Ashraf.....Amin ya Rabbal Alamin........
Jamal

nothing in life is certain

Have some decency to show respect to another human being's sorrow la.

This article written by Rocky got nothing to do with him being talibarut UMNO but with him showing some respect to another journo suffering ok.

You opposition goons really got no class lah. So petty and narrow minded!!

This is something I see the little that is left in Rocky's humility. Instead of grief, why don't you write about the enforcement of the laws on the road.

Where are the policemen tracking down speeding drivers? Here in New Zealand, when the speed limit is 100 on national highway, do you think anyone dare to exceed that speed. There are police cars all around and you cannot bribe the policemen. The police cars are all equipped with computers. They don't have to stop your car to find out if yr registration is in order.They can identify a stolen car instantly even if the number plate is changed with all the information from the computer...So Rocky, don't waste yr time spinning..write something that can change our country for the better.

I can understand. Having witnessed one cousin's death at a young age - seeing the grief of the parents is something too hard to bear.
Words can never express the grief and sorrow the parents are going through.

I was in the same office with Datu Manja's wife, Kak Norzita..I still remember way back in 1997 when she lost her baby..May Allah bless Ashraff's soul and give strength to Datuk Manja and Kak Norzita..

Ex-NST Writer Adam Kadir & tupingera: Ow, come on both of you. This entry is about death of a child, of grief, of shattered dreams and loves. Your remarks just proved how heartless both of you are. You have not lost a dearest one, you wouldn't understand. Dalam bahasa Melayu, kau orang berdua ni memang tak ada hati perut. Yang ada cuma nanah yang meloyakan mengalir dalam diri kamu itu. Bodoh punya manusia.

i was there at the mosque to lend a shoulder for him, and it was indeed a tragic loss. al-fatihah for the young soul.

Manja and Norzita we are here if you need us, anytime!

Al-Fatihah to allahyarham Ashraf & salam takziah to his fmly. I do not know the fmly but as a mother with 2 grown up children, i cannot imagine the pain that the fmly is going thru having to lose their child at such a tender age. But as muslims, we have to accept it as God's will and that God loves him. Semoga roh nya di cucuri rahmat senantisa. Amin.

And for those of you who made nasty & unsympathetic comments to this posting, pray that God doesnt make you go thru what the late Ashraf's fmly has to go thru.

Salam,
sebagai orng kecil dalam BH, saya hanya mampu ucapkan takziah dan sedekah al-fatihah to my ex-boss. i still remember him as the boss without protocol who can mingled around with his subordinates. AL-FATIHAH. from: shake

Uncle Rocky.
Thank you so much for your kind words. My family are very grateful to have such a beautiful pillar of support. Thanks for being there for my parents, they need their friends right now.

To those critics, my father and Uncle Rocky are friends since the 80's, long before they are in their position right now. So pandai-pandai la fikir sendiri.

Thank you once again Uncle Rocky.

Our roads are dead-beds. Almost every night there are accidents involving young teenagers.
Teenagers who are waiting for SPM results are eager to get driving license. As soon as they get license, there are out there driving into late mid-nights.The favourite teh-tarik joints, discos around Bukit Bintang are the usual spots in the city where young kids are roaming .
The tow-car operators are making money, sometimes they are the cause of accidents.
No amount of safety campaign is of any help.
1. JPJ should raise the age limit to 21.
2. Waiting 3 months to get SPM results in this digital era is a farce ! Those years we wait 3 months for Cambrige exam results.
Exam results should be out by a month.
3. Parents should not give a car to a young boy/girl to drive around with friends at night for no purpose. Night driving with poor vision isn't easy for fresh license holders.
Please promote these issues in your Malay mail lest someone's child is dying on our roads everynight.

As for those idiots, ignore them Khaleeq. Take care of your mom and dad. Only you and your sister can comfort them.

My condolences to the family mentioned.

You know, everyday about 15-18 Malaysians are getting killed on our roads all over.
What a loss, what a shame !
Imagine the families affected and the loss to the economy...

Please do what you can DATO.

my son have been pestering me to buy him a motor-bike. i said no. i think he must learn to be more responsible to have him own ride. i wish parents should never submit to their children request until later before the unfortunate occur..

My thoughts are with you, Nor at this delicate time.

Words would be meaningless at this point.

Rocky bro
My heart goes out to Noorzita and Manja and yes, burying one's child is something we do not wish even on our worst enemies.
Belated heartfelt condolences to Noorzita who was a dear colleague, and Manja with whom I go back a long way too.
KH

I cried at the funeral, though I only met Ashraf once in Cherating... and I cried again reading this and Kak Aina's blog...

it was a sad day... no parents should bury their children