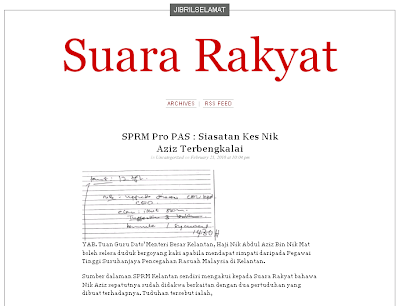 Suara Rakyat, a new socio-political blog, claims to have documents that should have been enough for the anti-corruption agency and cops in the state of Kelantan to nab the Menteri Besar. These documents are published in its latest posting SPRM pro-PAS.

The people who run Suara Rakyat said there will be a police report lodged on this matter (against MACC or against Nik Aziz, I'm not sure).

You surprised, bru? Well maybe not. For you see, it is a Sleepwalker inspired and appointed outfit whose job is to officially certify that certain groups are clean as a whistle so that they can go on blowing their tune that the graftbusters came, saw and left unconquered cos they couldnt find anything to ransack! This is the standard modus operandi (with a bit of variation here and there):

1. Blare in the press that certain pollies or parties are under investigation for illegal shenanigans.

2. Announce to all and sundry that investigation papers are being typed and evidence is being compiled.

3. Go into an enforced silence, a sort of civil "Khalwat"(look up its actual meaning, folks for it is not as you imagine). Probably the stage for leaks, evidence sabotage etc. (my hunch)

4. call another press conference and announce that so and so is clean as there was no evidence, offense technical in nature and other bull shit. Meantime charge a few goons to make the one side look bad as suspected all along and a squeaky clean image of the other is singed into the public's collective psyche. 2 birds with one stone, thingy.

That is why from Fairus to Beng Huat to Aminah's tattle to Ron lanchiau, to the korban cows to Nikki and many more, you have a litany of public cleansing even when the evidence is there as in the form of documents, tapes and pix, press reports, blog posts etc. It is an outfit established with the term of reference to sabotage from within as what SILhoutte and a few other rascals like the Samurai and the Coconut Merchant are doing on the political plane. An outfit that will go the extra mile to give more mileage to arsewhore's and his minions "clean" and 'incorruptible" image. So any surprises as to the Kelantan fiasco.

Making that up. Nope, everything is out in the public domain through press reports, interviews etc and that evidence is nothing but telling to say the least...

a few pieces of shitty jamban papers can meh?

Certainly the pro-PAS and PR fanatics will say all these are mere conspiracy to undermine the credibility of the MB of Kelantan. They will further claim those in UMNO who are guilty of corruption are not prosecuted so why should TGNA be victimised.

We wait and see the outcome.

All those who were/are involved in corruption, please raise your hands...

And to the wives, kids and grandchildren who are now enjoying the benefit of the ill-gotten assets and benefits through "these" corruption, please come forward, declare yourselves and return these properties.

Pakatan Rakayat now has a 'veto' power that every legal action cannot be taken against them. Even the kings /sultans or police cannot even 'touch' them. This is a sad day for Malaysia indeed.

1.PR can ask the judge to step down
2. PR can do demo & sleep on the streets, etc.
3. will ask MPs from other country to say that bribe is a righteous thing to do.
4. each MACC official will get a ticket straight to heaven if they don't prosecute nik najis.
5. Police should be sent to KICKDEFELLA house ASAP!!
6. he is the most RIGHTEOUS ULAMAK in malaysia and he even told god is gangster!! how in hell would MACC bring him to justice?
7. It would not look nice having anuwar and nik najis in the same prison cell
8. RPK will write a story saying rocky is involved in altutunya murder if you still publish this story and claim that you are the one who put the blade in his son's mouth.

rocky lending his credibility (whatever left of it) to some random poison pen website with a few scanned documents..lol. yes, minutes of meeting - does that prove anything? if i upload the doodle of rocky ..saying "...gay..." can i implicate him as gay?

if any malaysians keep taking crap without questioning the basic rationale behind it - we deserved to be sodomised by rocky and the others...

are u ppl here humans??

those ppl who think bad of a person like nik aziz are same as those who rape their own children.......


tomatoinc said...
rocky lending his credibility (whatever left of it) to some random poison pen website with a few scanned documents..lol. yes, minutes of meeting - does that prove anything? if i upload the doodle of rocky ..saying "...gay..." can i implicate him as gay?

if any malaysians keep taking crap without questioning the basic rationale behind it - we deserved to be sodomised by rocky and the others...

precisely!! whatever happens to Anwar and the gang who loves to hurl allegations at others without proofs?

So many more cases no action.