UMNO Youth Courage or Ketidaksopanan? Lawyer-blogger Jahamy, who runs Rapera, which is the latest addition to my blogroll, thinks there is need for more sophisticated methods to score political points.
Others (pls see at the end of this posting) don't agree.


Every time I balik kampung in Lubok Cina at the Melaka-N.Sembilan border about 90-min drive at legal speed on the North-South Highway from KL, I exit at Pedas-Linggi and must pass through Khairy Jamaluddin's constituency of Rembau.

You see more lembu, kambing and other binatan 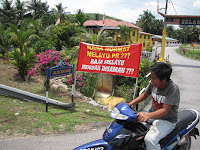 g ternakan than you see people along the narrow and winding Fed roads of Rembau. Yesterday, I saw more angry posters and banners than people.

Even though you don't see many of them, you can tell that of late the people in Rembau do not like Karpal Singh.

1. Because he is kurang ajar and biadap to Sultan of Perak, and
2. Because he called Pemuda Umno "celaka" 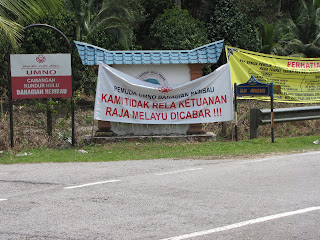 How much the Nyah Karpal tactic will help the son-in-law at the elections for the Umno Youth leader later this month remains to be seen, but it's clear that Karpal has succeeded in touching the hearts and minds of the Malays in the kampung and not just at Dewan Rakyat.

Updates on Sunday morning:
1. Umno blogger Big Dog says Umno Youth was exercising their right, and Karpal Singh is the Real Culprit!
2. Aziz Hassan, in Here's the New Malay for you, laments the rise of Karpal apologists among the liberal Malays
3. Shamsul Yunus feels that a softly worded sarcastic remark would have done the job better in Kenapa serang Karpal yang dah nak karam?