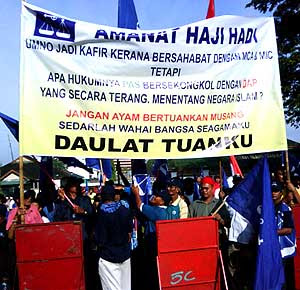 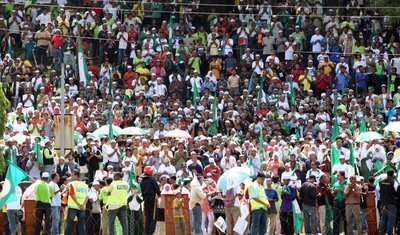 29/3 Tri-election: Total of five objections received and rejected; 15 candidates for Bkt Selambau, 2 for Batang Ai and 3 for Bkt Gantang confirmed/STAR

Three by-elections - including Batang Ai in Sarawak and Bukit Selembau in Kedah - will take place on the same day (April 7). But only the Bukit Gantang parliamentary by-election in Perak really matters.

A Pakatan Rakyat victory at Bukit Gantang can and will be used as proof, beyond any doubt, that Sultan Azlan Shah should not have given back the state of Perak to Barisan Nasional.

That the HRH's decision was against the wishes of his people, who want PR and not BN to represent them.

Fielding Nizar in Bukit Gantang is a political statement. If he wins, the former Perak MB, hailed by some as the modern Hang Jebat for his "mohon derhaka" antic, would be seen as having won not just against the BN but, more importantly, against the Sultan.

It will prove that this Jebat Moden was right and that the Sultan had wronged him.

PR has won all by-elections since March 2008 and is the incumbent for constituency.

Also, BN victory in Bukit Gantang will be seen as the people's support not just for the Sultan but also for Najib Razak, who's expected to be sworn in as our 6th Prime Minister on April 3, just four days before the three by-elections.

p.s. But Najib has his own problems. After the gruelling party elections last week, the fear in Umno is that the new party president may not be able to unite the members quickly enough. If Umno goes to Bukit Gantang and the other two by-elections divided over last week's election resuls, Anwar's Pakatan Rakyat will have a walk in the park.

Blogger Sakmongkol has sounded the warning in his blog, h e r e:

"Our common enemies are out there in Bukit Selambau and Bukit Gantang. I don't see UMNO there as the enemy. I don't see Pemuda UMNO as the unwanted bastard child. Do you?"