Bantuan Rakyat 1Malaysia was one of the main excuses Mahathir Mohamad had given when he started gunning for Najib Razak in 2015. He called it a form of corruption. Since then BR1M had been lynched and its recipients were shamed and told that there were receiving "dedak" from the Najib Administration. Najib was accused of bribing his way to get the people's support and of draining the nation's coffers in the process. In the run-up to the PRU14, even Mokhzani, the usually low-profiled son of Mahathir, and one of the wealthiest persons in Malaysia, got tangled up when he made perhaps one of the most seething insults on BR1M and its 7-odd million recipients. Read Getting BR1M nothing to shout about, says Mokhzani; Vell Paari slams Mokhzani for "disrespecting" BR1M recipients. 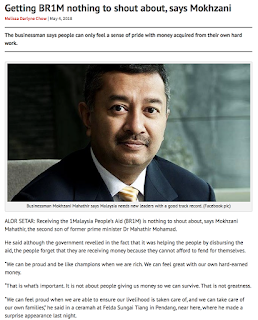 Perhaps realising how well BR1M was doing to help out Malaysians in the lower-income groups, and how threatening to abolish it might lose him and Pakatan Harapan support in the May 9 general election, Mahathir softened his stand on Najib's brainchild. Najib: Dr M thick-skinned for U-turn on BR1M

Today the scandal-ridden Finance Minister Lim Guan Eng confirmed that the Government is keeping BR1M but will be calling it BSH, or Bantuan Sara Hidup. The first BSH payout will cost the Government RM1.6 billion and benefit 4.1 million people.

Alhamdulillah! And Thank You, Najib Razak.