The story behind the Indira Ghandi's story


I usually stay away from controversial issues concerning religion, be it mine, yours, or theirs. Because I believe in most cases such controversies are created, manufactured, concocted to divide us, to turn us onto one another and keep us at loggerheads. And, if you notice, they become more rampant as this nation gets closer to a general election ...

The Indira Ghandi's controversy is no exception. It has a familiar ring to it. Malaysians have been here and they know it and yet here they are getting worked up and ready to go to war to defend their religions or attack others'.

When, in actual fact, according to Herman Basuki,*: 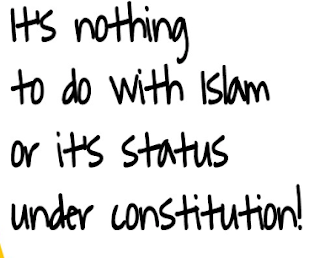 Excerpts from Indira Ghandi's case was never about religion

At the risk of grossly oversimplifying the grounds of judgment, the three key points of the judgment are:

The issue in Indira Gandhi’s case has always been whether the conversion of Indira Gandhi’s children to Islam by her ex-husband was lawful. For a child to be converted to Islam, the provisions of the Perak Enactment must be complied with. To put it more simpler, the procedures and perhaps ritual related to the converion as stipulated under the Perak Enactment were not done thus could put the conversion as questionable.

Indira Gandhi’s case was never about religion, it has always been whether the Registrar of Muallafs, the public authority responsible for registering the children as Muslims, have complied with the provisions of the Perak Enactment ... READ MORE!

** This was in August last year, "Hindu mother Indira Ghandi", as some newspapers described her,   may have a totally different view now ...

* OK, who is Herman Basuki?
I would like to know also because I would like to thank him for oversimplifying the issue. Sometimes that's what we Malaysians need. Kiss. As in, Keep it simple, stupid!