Views on the Malaysian economy: the kind of U-turn we'd like to see

Puchong, 12 Feb: NAYSAYERS are not going to like this, but the news about the Malaysian economy is good, if not great.

Seems that the economy is  not just turning the corner in great fashion but is expected to do  anything between well and very well in the coming years. Not that it has been doing that badly in the first place, as these detractors would like you to believe!

But don't take my word for it, read what the experts have to say ....

You can read a Malaysian news portal's version h e r e or opt for the Independent's These will be the 32 most powerful economies in 2030 but the suggestions are the same: Malaysia isn't going "south" or "bankrupt" and is not facing a crisis of confidence as some smart alecs have suggested; on the contrary, we are well on the way up.

Interestingly, four Asean economies will be there in the Top 32 (but not Singapore). Some of you ought to stop looking down on our Indonesian neighbours for they are expected to rip ahead to 5th position by 2030 and is poised to become one of the big four economies by 2050!

If The Edge's usually skeptical take on Najib Razak's economic handling is more up your alley, check out its latest analysis on Malaysia's economy performance. I'm not asking my dear Readers to start believing whatever the weekly owned by the controversial Tong Kooi Ong  publishes, just pointing out the fact that they could also be making a U-Tun on the economy here ... 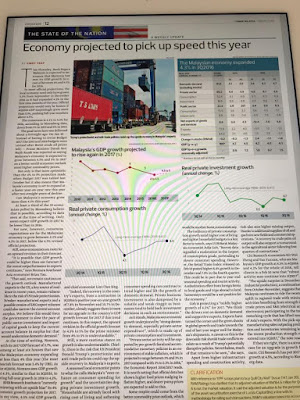