Who in PAC leaked confidental info to WSJ? And who the hell is Kamal Siddiqi? 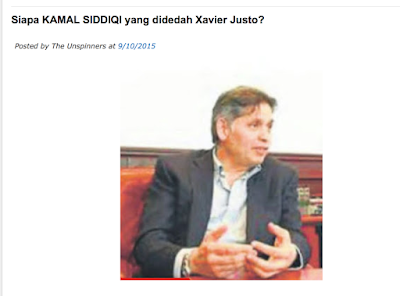 
We are further concerned as to who involved in the PAC hearings may have leaked this transcript, which is clearly an attempt to prejudice the PAC investigations and deny 1MDB its right to due process as provided for by the laws of Malaysia." - Arul Kanda, 1MDB


1MDB Stands by Its Audited Accounts

1MDB cannot speak on behalf of Aabar or IPIC nor can we comment on the accounting arrangements of third parties.

What we can confirm is that the 1MDB audited financial statements clearly describe the amount and purpose of the payments, which for the avoidance of doubt, is structured as a deposit (i.e. a financial asset belonging to 1MDB and not an expense to 1MDB).

Thirdly, we can confirm that 1MDB auditors, Deloitte, made specific and detailed enquiries on these payments prior to signing off on the 1MDB audited accounts.

Fourthly, Deloitte has strongly defended its methodology and audit process of 1MDB at the Public Accounts Committee (PAC) hearings, a bipartisan select committee of the Malaysian Parliament. Accordingly, the Wall Street Journal is wrong to state “it isn’t clear what happened to the funds”, at least not from a 1MDB perspective.

More importantly, we are shocked that a hitherto reputable publisher such as the Wall Street Journal would make use of clearly confidential information in its reporting. We refer specifically to the WSJ confirming it has reviewed a “transcript of the proceedings”, from a parliamentary committee probing 1MDB, of which the only possible source is the PAC hearings on 1MDB.

The Standing Orders of the Malaysian Parliament very clearly states that “the evidence taken before any Select Committee and any documents presented to such Committee shall not be published by any member of such Committee, or by any other person, before the Committee has presented its Report to the House”.

The actions by Wall Street Journal are a potential breach of Malaysian law by a supposedly respectable foreign publication. We are further concerned as to who involved in the PAC hearings may have leaked this transcript, which is clearly an attempt to prejudice the PAC investigations and deny 1MDB its right to due process as provided for by the laws of Malaysia.

1MDB strongly urges the relevant authorities to investigate this matter thoroughly and take all requisite action to preserve the process integrity and Standing Orders of the Malaysian Parliament.

Who the hell is Kamal Siddiqi? Read the Malay Mail's exclusive H E R E.
Me, I heard it was Mr Kamal Siddiqi who arranged for the meeting between Tun Dr Mahathir Mohamad and Claire Brown and another between the former PM and Azmin Ali, the Selangor MB, in London recently. Wallahualam.
at September 09, 2015