The headline says KJ urges Wisma Putra to censure Vatican cnvoy. I say bravo to YB Khairy for coming out to make a strong statement at a time when other Malay-Muslim ministers and politicians are just happy to wait and see and be safe.

Never mind if KJ was urging Wisma Putra to censure Joseph Marino a day AFTER Anifah Aman, the Foreign Minister aka Wisma Putra boss, had censured the Archbishop for his remarks on the "Allah" issue.

Perhaps, YB KJ's press secretary should start monitoring the blogs, too, as they are faster if not more objective than Malaysiakini or the Kini-wannabe Malaysian Chronicale. Eg my posting Do the right thing, Nuncio or Big Dog's even earlier Latin version Ludens Ignis Malitia.

p.s. Waiting for the other Bumiputera-Muslim leaders to take the cue from Wisma Putra ... 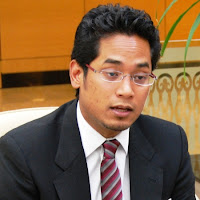 BN Youth has urged Wisma Putra to issue a protest note to the Vatican representative to Malaysia for purportedly supporting the use of the term "Allah" by Christians.
"This is a very delicate and sensitive issue in the country," said its chairperson Khairy Jamaluddin told a press conference today.
He hoped the note to the Vatican government would stem the flow of comments on such issues as it could further complicate matters.
"It's a national problem which is still being debated. The archbishop (Joseph Marino) is not helping the situation at all. His statement could complicate the situation."
“This is a matter of interference. Whether or not it (ban of word) has been agreed to or not is within court proceedings,” Khairy said.
“The majority of Muslims in the country have disagreed with (the judgment) and have requested for the court to review its decision. But it is still our affair, and the archbishop shouldn't intervene.”

Majority views
Khairy also stressed that such a complex issue must be delicately handled.
“We must take into account the views of the majority (population) and the Catholics without the archbishop's interference.”
However, he stopped short of demanding that the office be shut down and for Marina to be deported, as demanded by some irate Muslim groups such as Malay rights pressure group Perkasa and Jalur Tiga (Jati).
Last Thursday, Marino spoke to several reporters and chimed in on a fact sheet by the Christian Federation of Malaysia on why Christians should be allowed to use "Allah".
“In terms of how they presented the arguments in favour, it seems to be quite logical and acceptable,” he said, which was taken as overt support by some news organisations.
In Dec 31, 2009 the Kuala Lumpur High Court ruled in favour of Catholic Church of Malaysia's suit to revoke the federal government's ban on the publication's use of the term "Allah" to describe God.
However, a stay order on the judgment was granted pending appeal. The hearing for the federal government's appeal has yet to begin.
Khairy was speaking to reporters after the soft launch of the BN Youth job fair.
- Malaysiakini