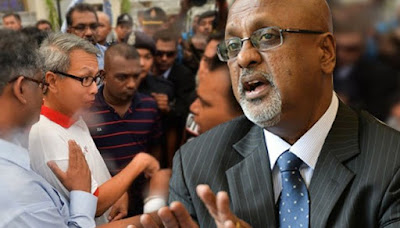 After his own little fiasco involving the recent toll increase fiasco (Toll hike for SPRINT not referred to Board, says Subang MP,  The Rakyat Post, Oct 15) it's understandable if YB Sivarasa Rasiah must go looking for an issue that can help him regain some political points.

The Sungei Way Deepavali bazaar petty traders' issue looks ideal for such: it is a super sensitive issue that has angered the Indian-Hindu community even more after YB Tony Pua got involved in a ruckus there the other day, which may or may not have started after the DAP man accused some present company for budaya samseng (PKR men lodge police report against DAP's Pua, FMT, Oct 16).

So Sivarasa wrote this lengthy, friendly advice to the DAP leader on what they shouldn't have done and should be doing. Except that it doesn't sound that friendly to me and some even see as a warning  (Sivarasa accuses Pua of making unfounded allegations, FMT Oct 18). And I don't think there's such a thing as a friendly warning ...


"Having watched the videos of the incident (in particular the Kinibiz video ) and read the Malaysiakini accounts dated 15.10.2015 and talked to some of those present, it seems to me quite clear that the heckling started after the crowd present which  included  traders understood that Tony had just said to the media present that ... the move to Easwary Temples area  was necessary to stop certain persons from committing extortion of the traders in the original site."

"However making unsubstantiated serious allegations that extortion is taking place without specifics ( as was discernible in the video ) does not assist at all. Name calling aggravates the accused persons further. The video shows some of those present demanding evidence from Tony and for which there seemed to be no immediate response." - Sivarasa's blog: Some friendly advice for my friend YB Tony Pua, Oct 18


What I find amusing is that while Sivarasa clearly thinks the DAP man messed up with the Deepavali petty traders' issue, he seems to want us to believe that his friend Tony is better poised to deal with bigger national issues like the 1MDB and removing the PM and ending UMNO's "corrupt, oppressive and inefficient" rule.


"My friend YB Pua has done sterling work ( and continues to do ) on critical national issues such as IMDB.  He should concentrate on those issues and leave more mundane  issues, like as in this case,  about  where a Deepavali bazaar should be located,  to the appropriate authorities to decide.

"We have far bigger battles to fight.  We need to remove Prime Minister Najib and end the corrupt oppressive and inefficient rule of UNMO and BN.  Let us remain united and focused on that."


So, walk away, Tony, take on someone your size. Is that it?