"Based on MCA constitution and also a statement by the president on May 21, the disposal of party assets can only be effected with the approval of at least two-thirds of the party's central committee.

"However, until today, the treasurer-general of MCA has neither tabled the proposal to the central committee nor obtained its approval," he said in a statement here Tuesday.

Matang's largest shareholder is MCA-owned Huaren Holdings with a controlling stake of 10.75 per cent.

Liow said the board of directors had also failed to explain the proposed takeover deal to the minority shareholders of Matang Holdings.

"We have, for instance, discovered a significant discrepancy between the two valuation reports on the property value of Matang Holdings.

"This, in itself, has raised the alarm and created concerns among the shareholders that it will be an inequitable deal that will leave them out in the cold," he said.

Matang Holdings is a debt-free company and to date has RM25 million in liquid assets.

Liow said Huaren should look out for the best interests of the minority shareholders.

"Failing this, MCA will be letting down its members, especially those who have held on to Matang Holdings shares for more than 30 years.

"This could even be another blow to the party, which has already undergone a punishing experience in the recent general election," he said.

LIOW SPEAKS OUT. MCA is in dire need of a savior after the party's worst results in a general election on May 5. The President, Chua Soi Lek, stubbornly holds on to power despite calls by party elders for him to step down now, not later, so that the healing can begin. Today, Liow Tiong Lai stood up to "strongly insist" that an EGM for Matang Holdings set for May 31 be cancelled. This, party insiders say, go against the wishes and whims of the party President.

When a time of need arises, a man to do the job will appear. The social media is buzzing in anticipation of a major battle. 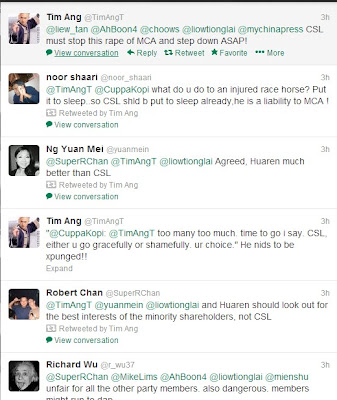