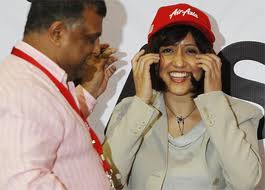 Big Dog is barking mad at Tony Fernandez's girl Aireen Omar. By the tone of his latest posting Air Asia should be RCIed, he'd bite if he could. "Outrageous!", the blogger says of the Air Asia CEO's call for an independent body to probe into the KLIA2 delay.

But in the name of the truth and good governance and transparency, etc, I say we should support Aireen's call. Let it all hang out. I'm not sure her bosses will be pleased with her if the probe happens, though, for the can of worms that it will open but then, who knows, it may also finally implicate the man they wanted sacked the other day (Bashir's tenure extended another year - Bernama).

In any case, YB Tony Pua should champion Aireen's probe call when Parliament opens, assuming that he'll attend the swearing-in when the 14th Parliament opens on June 24.

But before all that, Aireen should take a peek at A Voice's posting last Friday and tell us if it's true that she was so relieved that the contractors had failed to meet the deadline.

Also, is it true that Air Asia will still not be able to get 100 per cent ready for the KLIA2 when it finally opens later this year or early next year? Read, KLIA2: Another Nor Yakcop's "fraudulent" schemeing?

Bro, no airport in the world is ever on time in construction...

Najib is living in a make believe world. Where he is a statemen and his brothers are captain of industries.
This alter perception of Najib is due to the spectacles he is wearing.

But the reality is that the Malays knows what is going on. The top UMNO leadership are enriching Indians and Chinese so that they can get percentage of the action.

Just like licenses for immigrants Indian Ananda Krishnan is unconstutional, airline license for Indian Tony F is unconstutional as it involves states resources. Were these approved by UMNO members and the Malays?
No, just by corrupt ex UMNO President.

Bashir Ahmad is an Indian you know. Its all the game that ex Indian UMNO President played. Put all his races first.

You ask SC to check on Aireen an Indian lady, the SC is also Indian ma. Ali Hamsa the KSN is Indian. They put in all these Indians Ali Srigar in Kewangan, Nor Yakub in Khazanah to continue to plunder the Malay assets.

These are what anger the Malays. But the lessons of PRU13 is lost on these greedy people in Pemandu, EPu or Mampu all money generating engines for the Head. An airport, a power station etc. just so that maybe they can get a million or two for the billions that the Chinese and Indians will reap.