“... let’s see who the candidates are. If they are going to nominate some monkeys, we will reject.” - Derek Fernandez, MBPJ councillor, on the next Mayor of Petaling Jaya 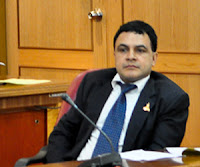 I don't know who Derek Fernandez is trying to attack with his remarks - the Federal government run by his political foes or the Malaysian Civil Service - but I know it's uncalled for. I also know there are just too many monkeys like him around. Orang Melayu panggil perangai macam ni kurang ajar.

THE transfer of Petaling Jaya City Council (MBPJ) Mayor Datuk Mohamad Roslan Sakiman to the State Secretariat is a promotion.

Chief Secretary to the government Datuk Seri Ali Hamsa attempted to clear the air over the controversial transfer saying that it was not a lateral transfer as suggested by certain parties.

“We are promoting him to a higher position. He will head the State Economic Planning Unit (UPEN),” Ali told The Malay Mail.

“We had spoken to the mayor and he feels the move to the State will be good for him as it is a promotion with more benefits,” Ali said, adding that several candidates had been identified to take over from Mohamad Roslan, who is scheduled to be appointed deputy state secretary (development) on Dec 1.

Councillor Derek Fernandez said while MBPJ was against a lateral move by the Public Services Department (PSD), it would have no objection if it was a promotion that would benefit Mohamad Roslan.

However, he insisted that the choice of mayor, including Mohamad Roslan’s transfer must be on the endorsement of the state.

“If what the chief secretary said is true, then it is good for Mohamad Roslan.

“If he is moving up to a Superscale B (from the present Superscale C) then it is good for him,” he said.

However, he said with regards to the federal authorities’ list of successors, “let’s see who the candidates are. If they are going to nominate some monkeys, we will reject.”

According to Fernandez, the post of mayor is an open one under the Local Government Act (LGA 1976) and the state government is allowed to appoint its own candidate.

He said MBPJ would also issue a letter to the PSD to offer it the opportunity to jointly petition the court to determine the law as to the appointment of federal officers.

MBPJ's full board meeting had on Nov 2 decided to seek a judicial review to prevent Mohamad Roslan's appointment to the State.

Fernandez said the council would seek answers as to whether it is correct procedure for the PSD to issue a lateral transfer to a sitting mayor who is a Superscale C officer in the absence of a sitting director-general of the PSD.

"We want to know if the deputy has such power to transfer and if so under who's instructions," he said.

It was sent via the office of State Secretary Datuk Mohd Khusrin Nawawi, whom Mohd Roslan was supposed to report to.

He was originally given only three days to report for duty, creating a storm in MBPJ as the city council would have been left without a mayor. At the same time, the deputy mayor Datuk Puasa Taib was on extended sick leave.

Mohamad Roslan will now take up his new post on Dec 1 — that too, said Fernandez if there is an acceptable replacement.

"Otherwise the State will source its own candidate."